All general COVID-19 updates for all members will appear here.
Updates for special bargaining units will be linked to the individual “Unit” pages (or link below).

• Board of Parks and Recreation

How to get involved

6 Ways to Get Involved

Everyone’s lives are getting busier each day which makes it more challenging for local union’s to engage members. Here’s how you can get more involved with the local:

Our bylaws set out the rules for how our local democratically elects our representatives, and how it is run. The bylaws have been approved by the membership, as well as by CUPE National.

Our policies set out the procedures for financial expenses, delegate selction, and more. Download here:

There are a number of forms that you may need to use while being active in this local. Download here:

In 2000, CUPE Local 1004 named the Union’s first scholarship the “Wilf Greensill Memorial Scholarship” in memory of Wilf Greensill who was fatally injured on the job by a hit and run driver on March 3rd, 1997. Wilf was employed by the City of Vancouver Sewer’s Branch since 1972. He was a truck driver and was checking an unusual noise on his vehicle when he was fatally injured. He left behind a wife, three daughters, family and friends. He was scheduled to retire within two (2) months and reminds us all how fragile life is. A bench has been dedicated to Wilf on the east side of the train in Stanley Park. The Sewer’s Branch retired Wilf’s truck number 1359 in his memory.

In 2020, Local 1004 dedicated the “Mo Cerra Memorial Scholarship” in memory of Mo Cerra who was fatally injured on the job in a workplace accident on September 28, 2019.  The incident occurred on a Saturday afternoon while our members were working in the area of Boundary Road and Second Avenue.

Mo worked for the City of Vancouver Streets Branch. He was a long-serving member and a very well-loved individual – the kind of person who always had a smile on his face and always went out of his way to brighten the lives of those he worked with.

In 2022, Local 1004 dedicated the “Gord Dolyniuk Memorial Scholarship” in memory of Gord Dolyniuk who was fatally injured in a workplace accident on January 7, 2022.  The accident occurred at National Yard while Gord was waiting to load salt into his truck for the winter “snow fight”.

Gord was a long-time 1004 member working for the City of Vancouver Streets Branch.  He was a quiet man that younger members looked up to for his advice, both on work issues and life in general.  He will be missed by all his friends at the City.

CUPE Local 1004 wants to ensure that Greensill, Cerra, and Dolyniuk are remembered and honoured by providing these scholarships.  The local awards three $1,500 General Studies scholarships each year to members, or spouse and children of members of the local.

Jody Taylor worked in the Urban Forestry field for 16 years. He was very skilled and knowledgeable, and was greatly respected by the members of the Vancouver Board of Parks and Recreation.  He helped many people improve their skills.  Jody was fatally injured while trimming a tree in Connaught Park on March 31, 2016.  He left behind his 10-year old daughter, and is greatly missed by all who worked with or knew him.  A memorial tree and bench have been dedicated to Jody in Stanley Park.  Jody was the powerhouse vocalist for ‘90s Vancouver hardcore band “Strain” which toured throughout Canada, the US and Europe.  As well as issuing a number of singles, the band released a full-length album, “Here and Now”, in 1996.

Brian Goble worked as a Mental Health Worker for more than 15 years for the Portland Hotel Society, supporting some of Vancouver’s most vulnerable and disenfranchised citizens.  Brian was a world-renowned punk rock musician and social activist. Under the pseudonym “Wimpy Roy”, he fronted the legendary Vancouver band, the “Subhumans”, and went on to join one of the most important punk bands of their time, “DOA”. Brian dedicated his life to his art as activism and never shied away from taking a stand in support of working people, society’s less fortunate or those fighting against destructive governments, both at home and abroad. Brian suffered a fatal heart attack while on the job in December of 2014.

CUPE Local 1004 wants to ensure that Taylor and Goble are remembered and honoured by providing this history and scholarship.  The local awards two $1,500 Music and Fine Arts scholarships each year to members, or spouse and children of members of the local.

CUPE BC continues to offer the Aubrey Burton/Reg Ford Memorial Scholarship to CUPE members, their spouses or their children at a level of four scholarships of $500.00 each.

CUPE in the Community

CUPE 1004 donates to a number of charitable organizations each year. In 2016, the local made donations to the following organizations:

All donation requests must be submitted in writing to president@cupe1004.ca.

This local does great work, but so does our parent organizations. Check out their websites to see what campaigns they are taking on in our communities:

CUPE 1004 Advocates for its Members

If you are facing an issue with your employment, a workplace issue, etc., CUPE 1004 recommends that you contact your steward to help navigate the processes agreed to between the union and employer. You can also contact our office and someone will be able to direct you in the appropriate direction.

Accidents happen, so we all need to be educated and prepared for what to do in these situations. Here’s an interesting read on dealing with WCB: I Will Never Get Injured on the Job

The Workers’ Advisers Office (WAO) provides free advice and assistance to workers and their dependants on disagreements they may have with WorkSafeBC decisions. 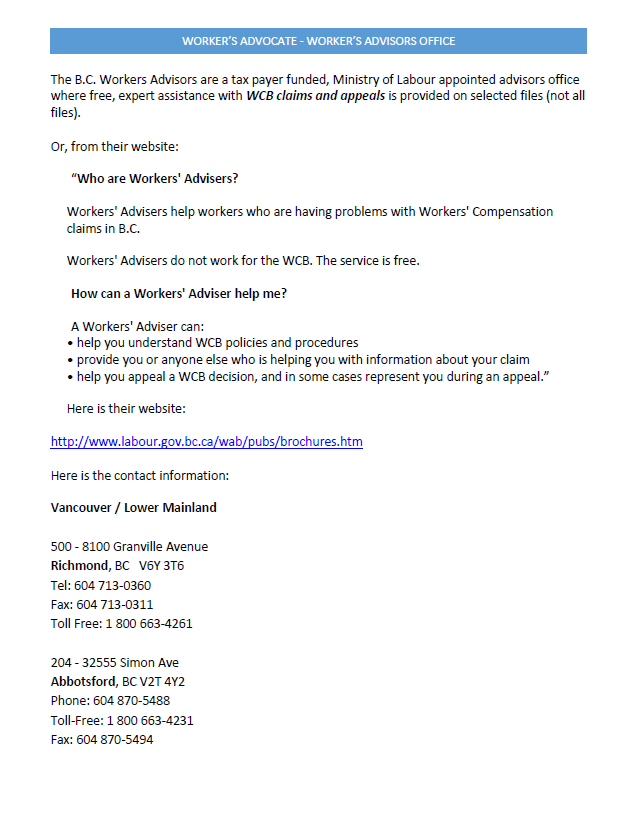 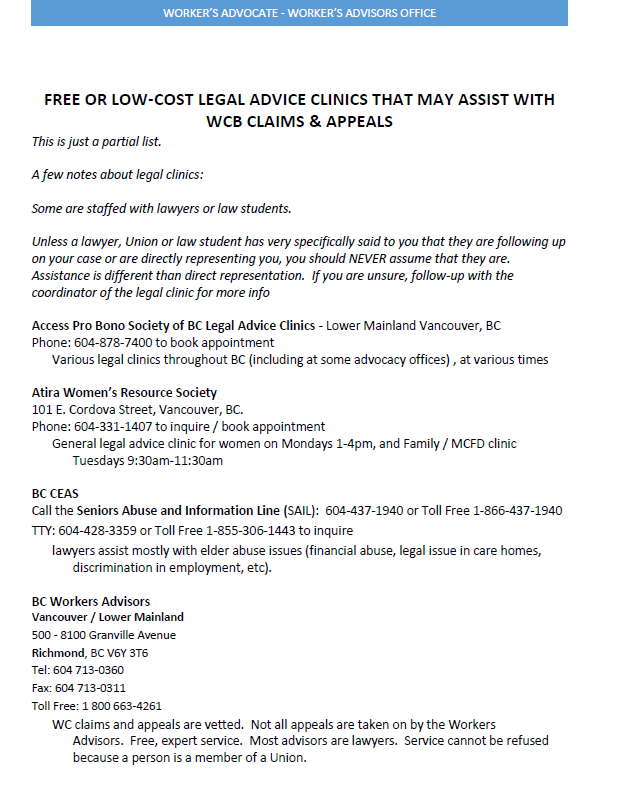 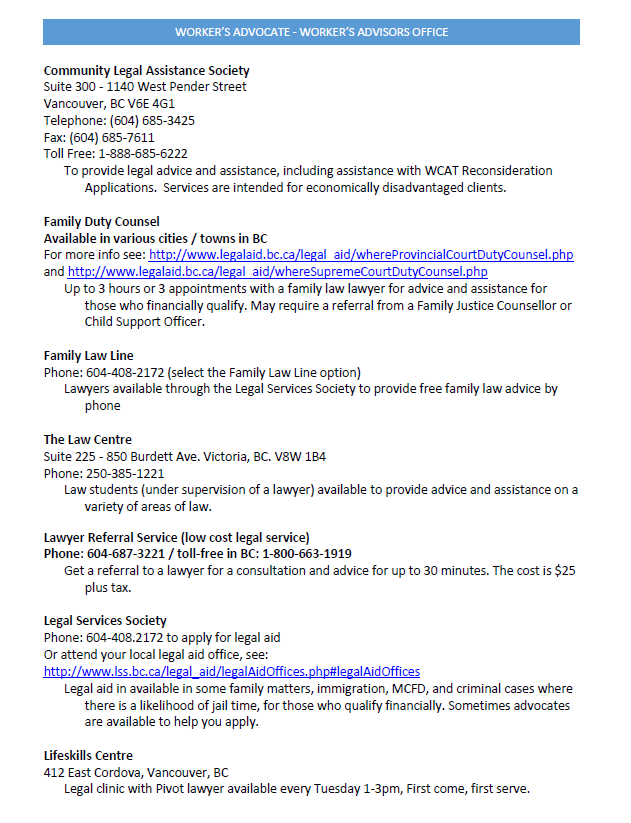 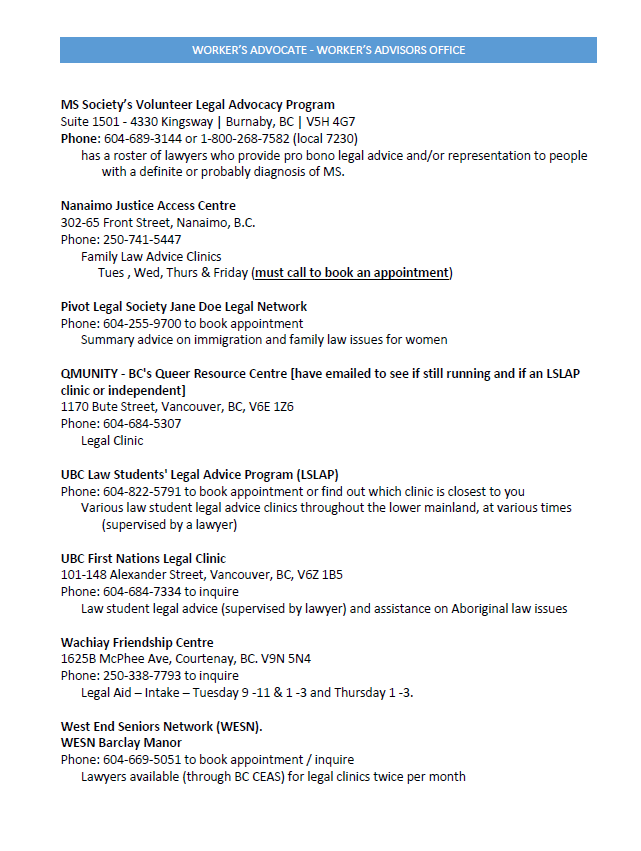